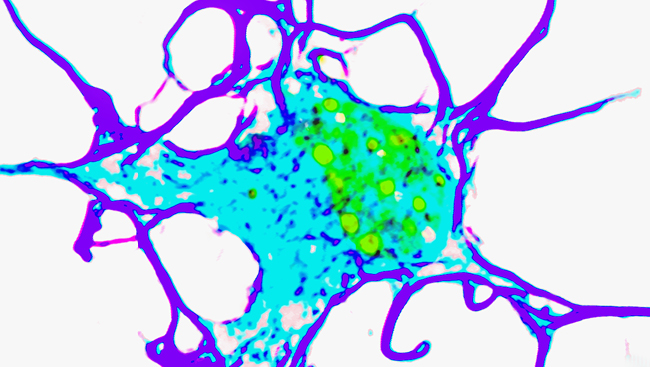 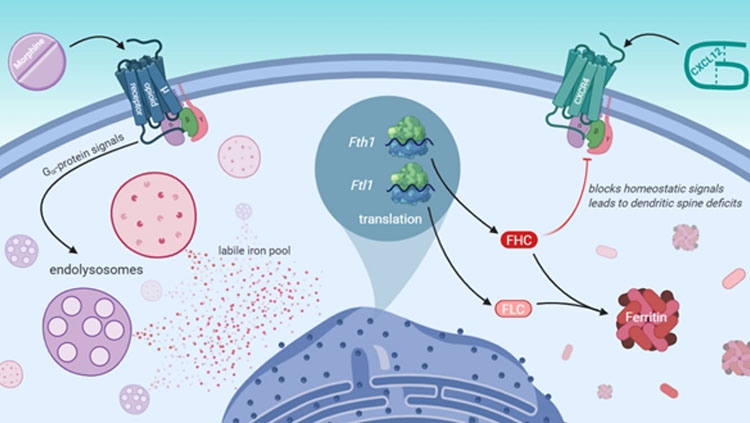 Evidence suggests that morphine and other kinds of licit and illicit opioids contribute to learning and memory problems in HIV patients by reducing neuronal connectivity in specific brain areas. Therefore, our main question was: What are the molecular factors that lead to reduced neuronal connectivity after exposure to morphine?

How This Research Advances What We Know

Despite widespread use and benefits of HIV therapies, people with HIV still develop learning and memory problems as they age. These problems are worsened by opioid use, which is very common among people infected with HIV.

Opioids and HIV infection can cause subtle functional changes and reduced connectivity of neurons in specific brain areas, which is thought to contribute to cognitive symptoms. However, the means by which opioid use contributes to these subtle neuronal changes is not completely understood.

Previously, we showed that µ-opioid compounds like morphine increased the levels of an iron storage protein called ferritin heavy chain in cortical neurons, which was required for morphine to reduce neuronal connectivity.

This new study showed that morphine released iron stored in intracellular compartments called endolysosomes, and that this pool of iron was required for morphine to increase ferritin heavy chain levels and reduce the connectivity of cortical neurons.

We performed most experiments in this study using primary cultures of rat cortical neurons and used standard approaches to measure the levels of select proteins and messenger RNAs. We measured the number of connection sites among neurons using microscopy with fluorescent dyes that label dendritic spines, the post-synaptic structures of excitatory synapses. To measure iron levels in sub-cellular compartments, we allowed neurons to take up fluorescent iron indicators that naturally reside in either endolysosomes or the cytoplasm and measured their brightness. We repeated each experiment at least three times, each time using neurons from a different litter of rats.

We also determined if certain results from our neuronal cultures translated to the rat brain by staining brain tissue sections from morphine-treated rat pups. To reduce experimenter bias, lab members who imaged and analyzed these brain sections did not know if they were from placebo or morphine-treated rats.

When morphine increased ferritin heavy chain levels, we also observed a reduction of specific types of dendritic spines that are thought to underlie short-term (learning) and long-term (memory) processes. This spine reduction was also prevented by drugs that block signals from the µ-opioid receptor or its corresponding G-protein.

Our current research is focused on better understanding this process, including which downstream opioid signals and endolysosomal channels or transporters are involved in iron release, and how morphine affects the production of other iron-related proteins that might contribute to learning and memory problems.

Visit eNeuro to read the original article and explore other content. Read other summaries of eNeuro and JNeurosci papers in the Neuronline collection SfN Journals: Research Article Summaries.

Bradley Nash, PhD
After completing his PhD in the Meucci Lab at Drexel University College of Medicine in Philadelphia (2017), Bradley Nash decided to pursue his passion for scientific communication and worked as freelance writer/consultant for approximately one year. During this time, he also became involved with various educational activities close to his doctoral studies on opioids and HIV-associated neurocognitive disorders.

Olimpia Meucci MD, PhD
Dr. Meucci is a professor and chair of the department of pharmacology and physiology at Drexel University College of Medicine (DUCOM), director of the Center for Neuroimmunology and CNS Therapeutics of DUCOM’s Institute of Molecular Medicine and Infectious Disease, and a fellow of the Hedwig van Ameringen Executive Leadership in Academic Medicine® (ELAM®) program. She trained as physician-scientist at the University of Naples, University of Virginia, NIH, and the University of Chicago.
﻿