A New Way for the Hypothalamus to Control Sleep 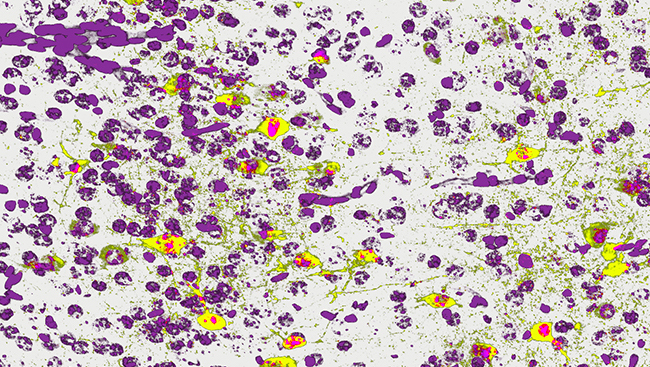 Material below summarizes the article QRFP and Its Receptors Regulate Locomotor Activity and Sleep in Zebrafish, published on February 10, 2016, in JNeurosci and authored by Audrey Chen, Cindy N. Chiu, Eric A. Mosser, Sohini Khan, Rory Spence, and David A. Prober.

Sleep is an evolutionarily conserved behavioral state whose regulation is poorly understood. The hypothalamus is thought to play a key role in regulating sleep in vertebrate animals, but few sleep-promoting signaling pathways have been identified.

RFamide neuropeptides, named for the presence of arginine (R) and phenylalanine (F) amino acids at the end of each peptide, are candidate sleep regulators. This family of peptides has been implicated in regulating feeding, locomotor activity, and energy homeostasis in vertebrate animals. Members of this family have also been shown to promote sleep in invertebrate animals, such as fruit flies and roundworms.

Given these findings, and the fact that regulation of feeding and sleep are often linked, we hypothesized that QRFP, a member of the vertebrate RFamide family, would play a role in sleep regulation.

In mammals, QRFP is exclusively expressed in the hypothalamus in thousands of neurons. We found that in the zebrafish, a diurnal vertebrate animal, QRFP is also expressed in the hypothalamus, but in only approximately 15 neurons at larval stages, when sleep is first observed, and in approximately 120 neurons in adult animals. QRFP is expressed in a subpopulation of hypothalamic neurons that also produce the excitatory neurotransmitter glutamate and are adjacent to neurons that produce the neuropeptide hypocretin/orexin, which promotes wakefulness and feeding in both mammals and zebrafish.

Mammalian QRFP signals via the G-protein coupled receptor Gpr103, which exists as two paralogs, Gpr103a and Gpr103b, in zebrafish. Gpr103b is expressed in neurons that produce the inhibitory neurotransmitter GABA in some parts of the hypothalamus, and in neurons that release the excitatory neurotransmitter glutamate in other areas. Gpr103a is expressed in several small nuclei in the forebrain, hypothalamus, and hindbrain.

Using these criteria, several labs have shown that a period of one or more minutes of rest corresponds to a sleep state in zebrafish larvae.

To test whether QRFP signaling plays a role in regulating sleep, we created transgenic zebrafish that allow inducible overexpression of QRFP, and mutant zebrafish in which we mutated qrfp or its receptors.

Because QRFP gain-of-function and loss-of-function phenotypes were seen primarily during the day, we asked whether circadian rhythms influence qrfp expression or function. We found that the level of qrfp mRNA did not oscillate in a circadian manner over a 24-hour period, suggesting that the circadian clock does not regulate qrfp expression.

We found that entrained circadian rhythms are not required for QRFP-induced sedation. Use of an alternate lighting paradigm in which larvae were exposed to alternating one hour periods of light and darkness confirmed that the QRFP overexpression phenotype is specific to the day due to the presence of light and not due to circadian regulation of QRFP function.

Future studies will focus on how QRFP/Gpr103 signaling, as well as QRFP neurons, interact with other sleep signaling pathways and neurons to regulate sleep, and also whether this system has a similar function in mammals.

Visit JNeurosci to read the original article and explore other content. Read other summaries of JNeurosci and eNeuro papers in the Neuronline collection SfN Journals: Research Article Summaries.

David Prober, PhD
David Prober is an assistant professor of biology at the California Institute of Technology.

Audrey Chen, PhD
Audrey Chen was a postdoctoral fellow in David Prober’s lab and is now a visiting assistant professor of biology at Claremont McKenna College.
﻿