Q&A: A Hill Staffer Shares How to Craft an Impactful Pitch 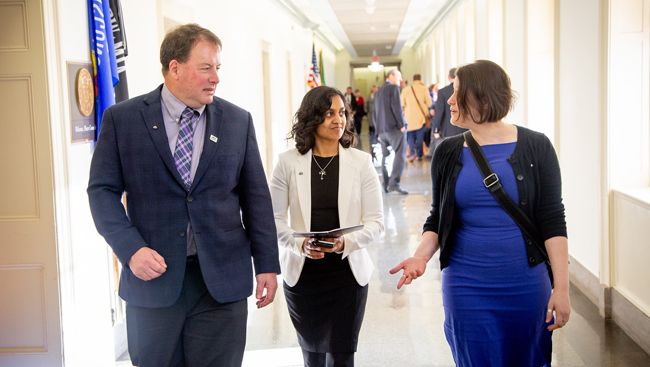 Neuroscience advocates hope to ensure the future of scientific discovery by sharing the importance of their research with members of Congress and their staff. But what goes into an effective pitch? Here’s an inside look — from someone on the other side of the table — at what members of Congress want to know.

What makes a pitch stand out?

The best pitches don’t feel like pitches at all. They feel like a pathway to action. It succinctly identifies a problem, links that problem to existing or prospective constituent concerns, and then proposes a solution that considers the congressional Member’s perspective by addressing potential policy, political, or procedural barriers they may encounter.

The single best way to strengthen your pitch is to individualize that pitch to the Member with whom you are meeting. Sometimes that means preparing specific questions designed to elicit responses that allow you to individualize your pitch as you are making it. It's definitely an art in its own right, but the most effective advocates have perfected it.

What do you want to know at the start of a conversation?

The most successful meetings start the same way a good conversation would: with a friendly greeting and an introduction that conveys your genuine interest in sharing your story and learning new perspectives. Knowing who I'm speaking with — and why — is fundamental to everything that follows.

What considerations do you have in mind when listening to a pitch?

The main consideration is "How can I take a constituent’s problem and deliver a win for both them and my boss?"

Staffers are human. They can be motivated by emotion and personal experiences as much as anyone else, but at the end of a meeting, what really motivates a staffer to take action on your request is a clear sense that they can help their boss be more successful.

What further information can help staffers make a strong case for your request to their legislators?

Every office will have unique approval protocols based on the preferences of the Member, but in general, it’s valuable to point staffers in the direction of other interested offices within their Member's state, party, or relevant committees.

Helping them find support of other specific Members serves as a heuristic that allows them to determine how openly interested or restrained they can be in considering the issue with you.

If others are on board, it easier for them to seek more information and insight on the problem and potential solution, which increases the likelihood they’ll give your request further attention.

What happens after the pitch?

I've worked for three Members, and again, the process can vary widely. Overall, the most important point to remember is that for most staffers, the end of one meeting may be followed immediately by another meeting on a very different issue. That's why reducing the potential workload on a staffer is key.

The better you can frame the problem and solution from their Member's perspective and provide a simple, actionable roadmap for the staffer to secure a win for their Member, the more likely your request is to be prioritized among the many a staffer will deal with each day. Help make their decisions simpler and your request is more likely to receive further attention.

How does the political or economic climate affect the interaction between policymakers and advocates?

It's easy to say it matters a great deal, and that may be true with respect to individual requests. But at the end of the day, the best an advocate can hope to do is turn the Members or staffers with whom they meet into advocates themselves. If you’re successful in that, the political or economic climate won't stand in their way any more than it stands in yours.

Wesley Brooks, PhD
Wesley Brooks is a legislative assistant in the U.S. Senate. Prior to that he served as a senior legislative assistant and policy advisor in the U.S. House of Representatives. Brooks has authored numerous peer-reviewed papers, was named an Emerging Public Policy Leader in 2011 by the American Institute for Biological Sciences, and was selected as a Congressional Hispanic Caucus Institute Graduate STEM Fellow in 2013. He is additionally an alumnus of the Woodrow Wilson International Center for Scholars Foreign Policy Fellowship and Cybersecurity Fellowship programs.
﻿
MORE
4 of 5 articles left
Login or Become a Member to unlock content